My very first code editor was visual studio 2010 for windows 7. This was when I didn't know what programming was, and a teacher I had suggested that we used that, so we could start learning some C#. It was very fun and all, but soon after, I decided that I wanted to learn another language, and the whole idea of using an IDE which is specialized for a specific programming language or environment just seemed very odd to me. Surely there had to be better options, where I as a user could decide by myself what languages I wanted support for. I tried out multiple different small editors but didn't really like any of them.

After some time, I decided that I wanted to try linux, and I installed fedora or linux mint (don't remember at this point), and I liked it very much. Comming from windows where it is normal just to go to a random website and download the tools I needed, it was a great joy to be able to just type a command in the terminal and watch my program get installed.

After reading online for some time, it seemed that the editor which all the cool linux users used was vim, so I decided to learn that. The experience was very different from what I was used to, but I liked the keyboard shortcuts and that it looked very cool. Of course I installed every plugin that I had read about online and it all became a mess, but I stuck with it for around 3-4 years. The things I liked the most was that I felt it was very fast to do what I wanted, but unfortunately the flow with multiple files was never something I could get used to, and all the plugins made me sick.

Just to give another very popular editor a try, I installed emacs sometime 2-3 years ago. Comming from vim, the keyboard shortcuts in emacs sucks, but the editor itself is just so much more powerful, because plugins and customisations could be written in a real programming language. I started, as many other emacs users do, to use emacs for everything i could. I read my mails, watched PDFs, managed my system, and even used it as my window manager for a period. Around the same time that I started using emacs, I also started using OpenBSD as a secondary operating system. I noticed that many very good tools are available in unix, but emacs almost has everything implemented again in elisp, which seemed stupid to me. But hey, it works so I stuck with it. Until late 2019.

One day in school when one of my group mates asked if I could look at something for him, I saw that he was using visual studio code, which made it natural to use a mouse to click around in the file. Of course this was also possible in emacs, but since I came from vim, it was never something that I did. He argued that it was much faster to just click in the file where he wanted to edit, than to navigate using the keyboard, and I thought that maybe he was right, so I started digging. After some time looking though the internet for some editors which made much use of the mouse, I found acme and decided to install it. And wow it was different. 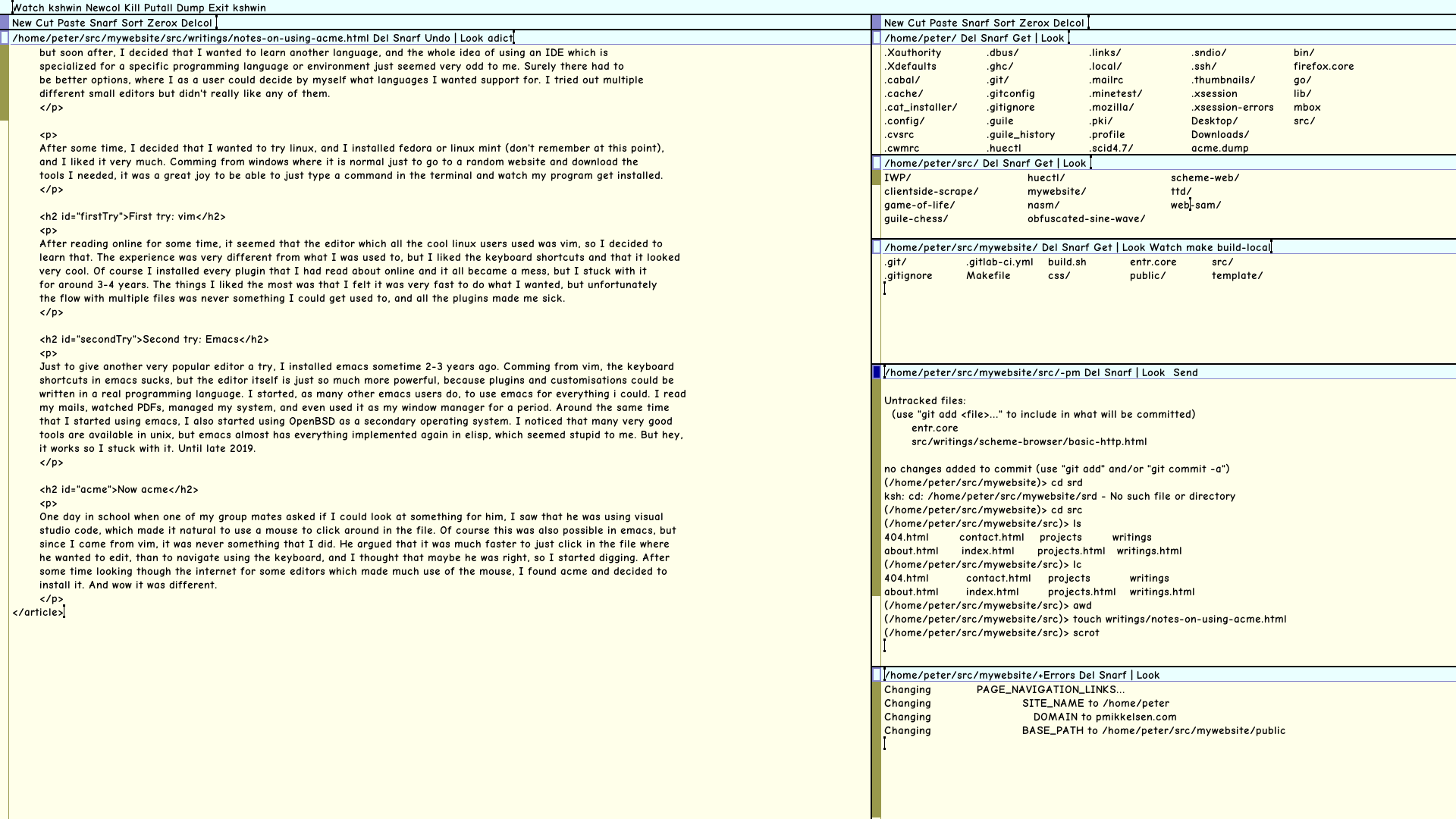 Acme uses the mouse for everything, since there are very few keyboard shortcuts (not even copy and paste). As shown on the picture, there are no menus and no icons; everything is just text, and the different buttons on the mouse can interpret that text in different ways. For example, middle clicking on the text New wil create a new text frame, and right clicking on the text example will search the file for the word. Actually, it is more advanced than that since the right click will first send the selected text to something called the plumber, which might do something fun like opening the file which has that name. I suggest interrested readers to read the page here and some of the documents linked from that site to learn more about acme. The video introduction from Russ Cox here is also great.

Other editors I use sometimes

Sometimes I have to do very small editing tasks, and sometimes as root, in which case it is just simpler to open the file in vi. Note that this is the small vi, and not the "improved" vim. I also sometimes edit my text in sam with is another editor written by Rob Pike, and I quite like that one too for smaller projects. You can read more about sam here.